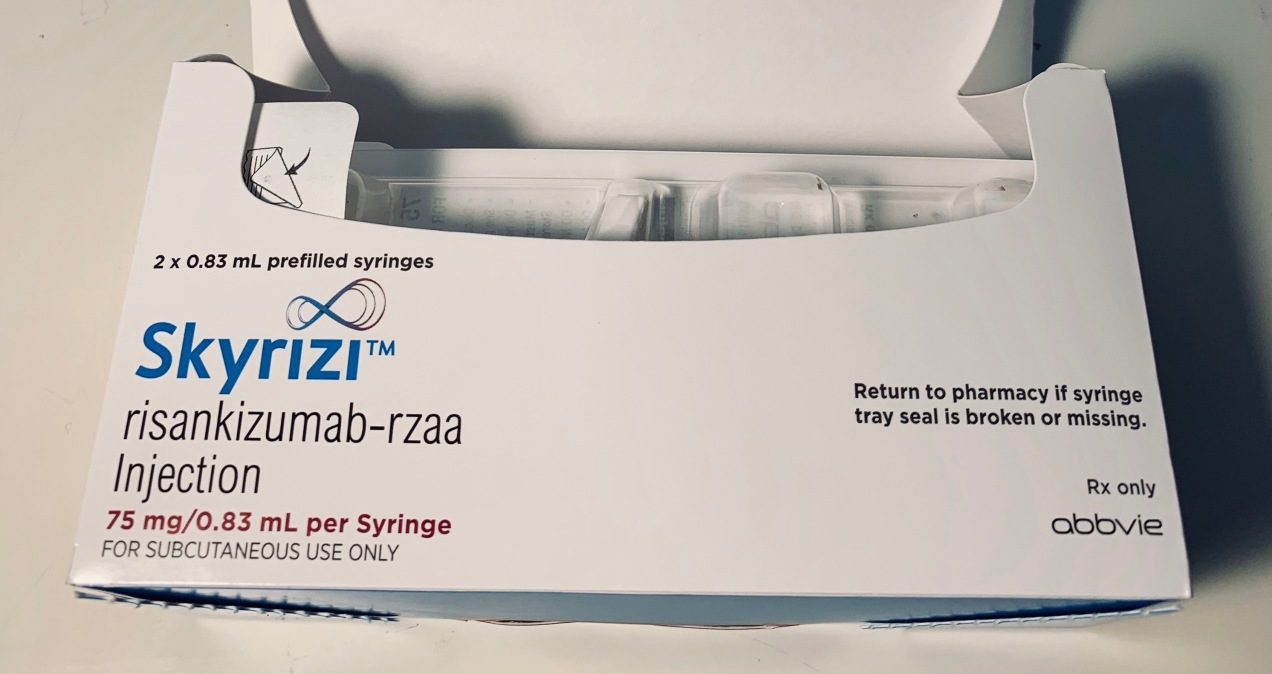 It happened faster than I could mentally prepare myself—I’ve stopped Tremfya (Guselkumab) and started Skyrizi (Risankizumab) on Friday.

The conversation about starting Skyrizi began with a message to Dr. Christie Carroll on the day the FDA approved Skyrizi for moderate to severe plaque psoriasis in April. She told me that the prescription request might run into problems with gaining insurance approval for a brand new medication. Also the pharmacy probably did not yet have it in stock and ready to ship. She offered Taltz (Ixekizumab) as an alternative.

I told her about the discussions I’ve had with other doctors and their thoughts on which biologic I could take. Even though they don’t know my personal situation as well as Dr. Carroll, they thought very highly of Skyrizi. With the data from clinical trials looking amazing (the Skyrizi website claims that “3 out of 4 people achieved 90% clearer skin”) I told her I could take Taltz first, but if it failed, I wanted to try Skyrizi eventually.

Read about my two year journey with Tremfya

At my next dermatologist appoint on May 17th Dr. Carroll told me that with the passing of a few weeks, and a new staff member to file prior authorizations, we could give Skyrizi a try. I would first need to get blood tests, especially and updated TB test before starting the new biologic.

Just over a week later I received a cryptic email from the specialty pharmacy, Accredo, that my prescription request was being filled. The next day I received a letter from my insurance provider stating they approved the prior authorization for me take Skyrizi. I immediately signed up for Skyrizi Complete, a service by AbbVie that would provide support such as copay assistance while taking Skyrizi.

A quick call to Accredo ended with scheduling a next day delivery of my first dose. The Nurse Ambassador, Adele, from Abbvie also agreed to call me in the late afternoon to assist me with the first dose the next day.

Two weeks after Dr. Carroll submitted the prior authorization request for Skyrizi I found myself injecting my first dose–one syringe on the left side of my abdomen and another on the right side. Hopefully in the future the dose will be one pen or syringe, but I didn’t mind the two injections this time around.

Less than a week into treatment I’ve experienced a myriad of emotions including hope, anxiety, excitement, and fear. I wouldn’t try a new biologic unless I felt hopeful and excited it might clear my psoriasis–even if for a season. The anxiety and fear of what side effects I might feel, and what it might be doing to my body besides cleaning my psoriasis is just as real.

Physically, I experienced some headache, lightheadedness, and fatigue after the first dose. It’s only been about five days so I’m not going to make too much of it. No doubt someone from the manufacturer will want to talk to me about my experience (they tweeted as much!) Not to worry, I will talk to my Nurse Ambassador soon about my experience so it can benefit others.

Finally, if you are praying person, I covet your prayers. I didn’t expect to start Skyrizi so quickly, and I’m still trying to figure out how I feel about trying my 6th (!) biologic for psoriasis since 2003. But whatever happens I know I’ve been through the lowest of lows with this disease and made it through with the strength of God.