As Father’s day approaches I can’t believe our oldest, Lydia, is turning 25. She shares her story from the heart here on her journey growing up with bipolar disorder.

For my perspective as a father on coming to better understand her bipolar condition see I Picked up My Daughter from the Psychiatric Hospital for the First Time on Father’s Day.

This year happens to be one of major milestones. I will be graduating with a bachelor’s degree after seven long years of undergraduate work that has been riddled with health setbacks. I will also be turning 25. It feels like a prime opportunity to reflect on my life journey and how it’s been shaped by living with bipolar disorder. While it certainly hasn’t been easy, I’ve grown in ways I likely never would have otherwise.

When I began experiencing mood swings as a young teenager in high school, I would have never guessed their implications for the rest of my life. I was certainly moody in ways many teenagers experience, but it was when I began self harming and daydreaming about suicide that I knew something was very wrong.

I remember a fellow classmate pointing out the scabbed over cuts on my wrist and asking what happened. I quickly pulled my sleeve over the evidence of my tumultuous mind and blamed the cat. They didn’t seem convinced but didn’t push the issue further. That moment of fear, guilt, and shame at my actions was a clear sign to me that I was ill. However, it wasn’t until much later that I finally asked for help.

That moment was one of the scariest of my life. I knew once I told my parents about my cutting and suicidal thoughts that I couldn’t go back to normalcy. But at that point, normalcy was locking myself in my room anytime I wasn’t at school. It was sitting in the dark with sharp blades, crying for reasons unknown to me, trying to push out the intrusive thoughts that constantly berated me. Although I wasn’t fully conscious of it, I had reached the point where I couldn’t live that way any longer.

As I predicted, life changed drastically. I began seeing a therapist weekly and started medications. The initial diagnosis of depression didn’t seem to quite fit, but having a name for all of these unwelcome thoughts and feelings seemed to help. While this time of my life is extremely blurry, I know I struggled desperately to regain a foothold but the ground seemed to keep slipping out from under me.

END_OF_DOCUMENT_TOKEN_TO_BE_REPLACED

On June 20, 1995 Lydia’s birth made me a father for the first time. After a long two-day induced labor and delivery, she came out to welcome the world. The nurse prompted me to cut the umbilical cord and then let me hold her–my first act as a newly minted father. I could not wipe the smile off my tired and weary face as I stared into that tiny newborn’s sleepy face.

Lori returned to work ten weeks after giving birth to teach middle school students. I started seminary two months later with taking care of Lydia as one of my primary responsibilities. For the next four years I stayed home with Lydia while I worked toward a Master of Divinity degree. My days filled with studying, changing diapers, feeding bottles, and taking her with me to run errands.

Little did I know the bonds she and I formed in those early years would prove to be so vital in saving Lydia’s life almost seventeen years later.

Teenage Struggles or Something Else?

During her teen years Lydia experienced ups and downs that seemed typical for her peers. She did well academically and engaged in extra-curriculars like cross-country and service clubs. But she struggled with finding good friends. At home she felt the pressure of being the big sister with two younger siblings. At church parishioners held her to higher expectations as the pastor’s daughter.

Little did I know the bonds she and I formed in those early years would prove to be so vital in saving Lydia’s life almost seventeen years later.

Nothing set off red flags as the teen years certainly present a unique set of challenges for young people.

Then that dreaded red flag went up high in late March 2012. Lydia woke me up one morning before going to school to ask if she could skip school that day. Her eyes looked saucer-like and afraid. Her hands were shaking. I said of course. She then showed me multiple cuts that she had made on her wrists and arms. She expressed her suicidal feelings and need for help.

Up until that morning she mostly kept herself hidden from her family members, often locking her door. She would have kept her desperate situation to herself if it weren’t for one of her friends who convinced her she needed to reach out to us. She ultimately exposed her struggle to me becasue she didn’t want her family to find her in a pool of blood.

Easter and Christmas hold a special place in the Christian calendar and at church. As a pastor I look forward to those times of remembrance and celebration. But they happen to be busier times demanding my devoted energy and time. Lydia’s first boyfriend decided to add to the stress of the Easter season that year by breaking up with her on Good Friday.

I never felt as afraid for Lydia as I did that Easter weekend. The previous weeks she started therapy, seeing a psychiatrist, and taking medication. She started to learn better ways to cope than self-harming. That weekend, though, she wanted to cut herself and felt suicidal again. Her psychologist thought we could handle her situation at home, but we needed to make some adjustments to keep her safe.

On Easter Saturday I spent half the night locking away sharp objects and medications. You never know just how many objects in a house can be used to cut until you intentionally search for every last one of them. Hours later, confident Lydia would sleep, I took a nap before heading out to church.

On Sunday, April 8th, I preached the Easter message on two hours rest with a flood of thoughts about Lydia on my mind.

Lydia and I at the Grand Canyon during our family trip in June, 2009.

Those next weeks we learned how to better monitor and advocate for her. We went to multiple medical appointments a week around Los Angeles County. Her mood seemed much improved and stable, but then she relapsed in June while on our vacation.

On Easter Saturday I spent half the night locking away sharp objects and medications. You never know just how many objects in a house can be used to cut until you intentionally search for every last one of them.

Originally, the family planned a trip to Yellowstone National Park via Las Vegas and Salt Lake City. Due to Lydia’s health we changed plans. Our caring friends in the San Francisco Bay Area, where we previously lived, opened up their unoccupied rental unit for us.

As soon as we arrived I looked for and hid any knives and scissors in the townhouse. I didn’t know at the time, but Lydia beat me to it. She grabbed a large kitchen knife to tuck away in the room she stayed in.

After a week in the Bay Area we started to drive back to Southern California. Instead of driving the four hundred plus miles in a day, we decided to stop in Monterey for a night. Lydia’s two younger siblings noticed cuts on her upper legs and thighs. I also noticed a number of cell phone calls from her phone to locations around the country.

At Fisherman’s Wharf she broke down in tears. A quick dinner near the motel turned into a long evening.  Lydia shared how she had been cutting again, with that knife from the townhouse, and now wanted to burn herself.

At Fisherman’s Wharf she broke down in tears. A quick dinner near the motel turned into a long evening.  Lydia shared how she had been cutting again.

The next day we piled into the minivan in the morning to make the final trek back home. Along the way I called a couple of her health care providers. Her psychologist suggested we take her directly to the emergency room at a local hospital. I thought if I could drive her closer to home the family could use home as a base to care for her. She sat in the back row of the minivan blasting music through her earbuds to ward off the voices in her head.

We finally arrived at our destination, Kaiser Baldwin Park Hospital, to meet my parents and dog, Teddy. My parents took the younger two children home while Lori and I stayed with Lydia at the hospital. Later that evening an ambulance transported her to to a psychiatric hospital in Cerritos, about 25 minutes drive away.

First Timer in the Psychiatric Hospital

She stayed in the psychiatric hospital for about six days in the adolescent ward. During that time we visited her every day during visiting hours, often battling LA commute traffic. We cleaned up her room, and gathered up several pairs of sharp scissors that had fallen behind her bed.

We didn’t tell the church or many friends about Lydia’s condition. We wanted to protect Lydia’s privacy first and foremost. In her mental state at the time she could not make a sound decision about whom to tell or not tell. We also didn’t know how others might react to her condition. Stigma related to mental illness continues today as back when Lydia first learned of her mood disorder.

On Saturday, June 16, 2012 we learned she would be discharged the next day, Father’s Day, in the afternoon. To not raise any undue concern or alarm at church I decided to continue with my morning duties. I preached the Father’s Day message that morning without anyone but my family knowing about Lydia’s hospitalization.

On Saturday, June 16, 2012 we learned she would be discharged the next day, Father’s Day, in the afternoon.

The family went to pick her up directly from church. Lydia gave me a big hug when we first arrived. After receiving discharge paperwork and directions we took our baby home from the hospital just as we had done seventeen years before. 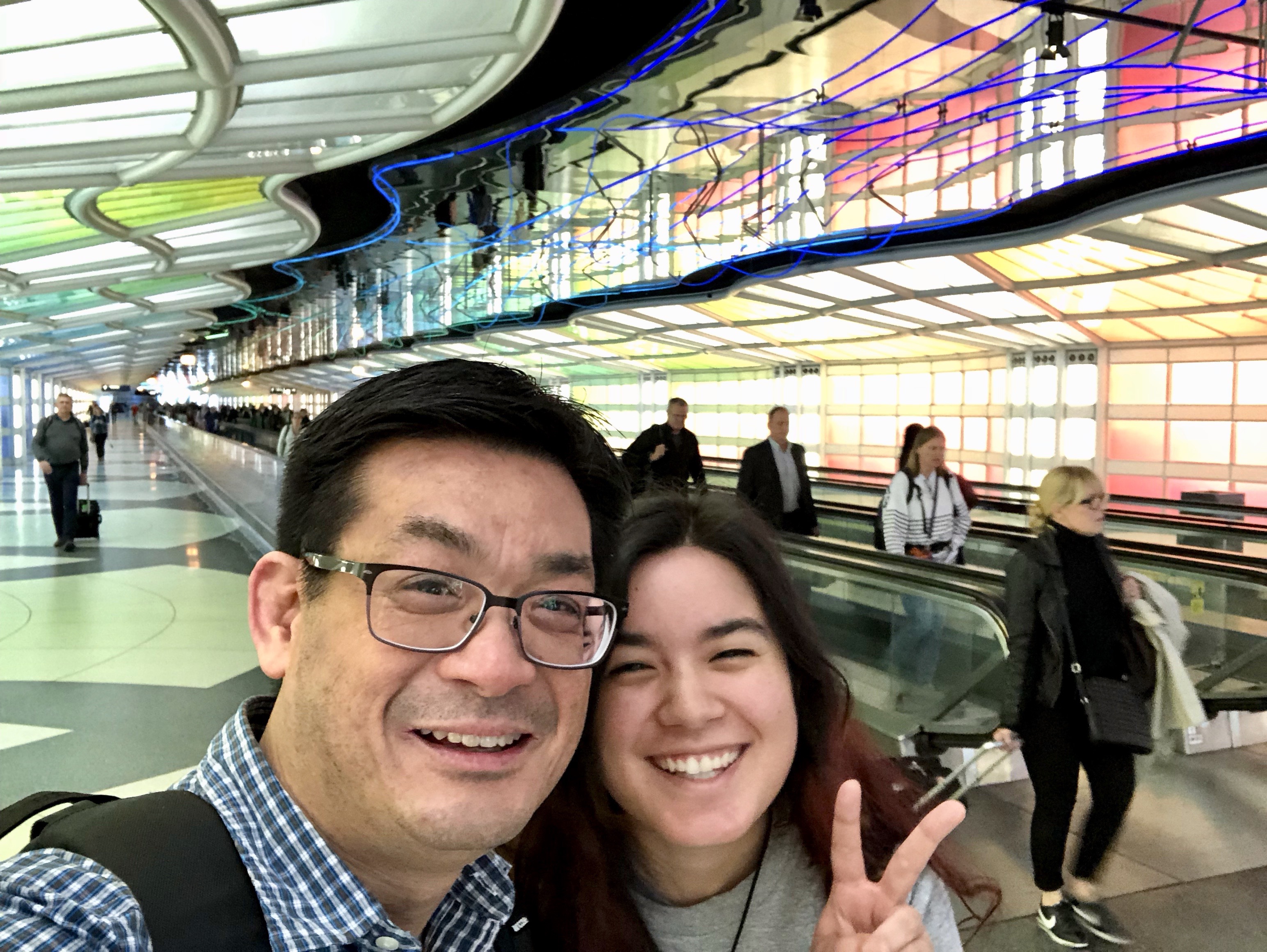 The two of us travelled to Chicago together when I attended the HealtheVoices conference in April. It was her first time at Chicago’s O’Hare airport.

That week after discharge Lydia’s psychiatrist confirmed her diagnosis: Bipolar Disorder I w/Psychosis. These past six years I’ve learned more about bipolar disorder and fathering than all the previous years combined. The continuing story of Lydia’s battle with bipolar is for another day.

For today, though, on this Father’s Day, I remember when I brought Lydia home from the hospital both twenty-three and six years ago. I thank God for His mercy and protection over our lives and feel confident that He will continue to watch over Lydia in the days ahead.

Lydia will enroll in the University of California, Davis in the fall to study psychology and animal behavior. Check out her blog Sincerelydia to learn more about her life and mental health journey.