The awe-inspiring lunar eclipse this morning from the backyard of our house near Sacramento in Northern California.

I set the alarm for 4:30 a.m. this morning to catch the rare super blue blood moon. A super moon happens when the moon in particularly close to the earth. A blue moon is a second full moon of a calendar month, January. A reddish blood moon comes when the moon is in the earth’s shadow during the eclipse. It’s rare for all three to happen at the same time.

When I heard that the West Coast would provide some of the best views I set my mind to wake up to see it. Little did I know that my son stayed up to catch the whole -rogression from partial eclipse to totality. By 5:15 a.m. the entire family stood in the sub 40 degree cold to look up at the sky to see a sight not seen since 1866.

My son used an iPhone camera in the eyepiece of our Celestron telescope to take the photos. We defintely need a better set-up for photos, but the pictures still looked amazing. Here’s a picture of the partial eclipse. 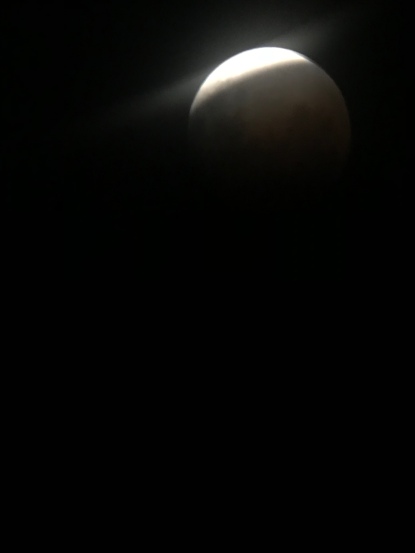 The total eclipse lasted for just over an hour from about 5 a.m. to 6 a.m. By 5:30 a.m. the bright moon darkened to the point where we could pick out a few constellations.

We caught part of the partial eclipse portion, but the sun rose to wipe out the whole scene before we could see the bright super moon again. 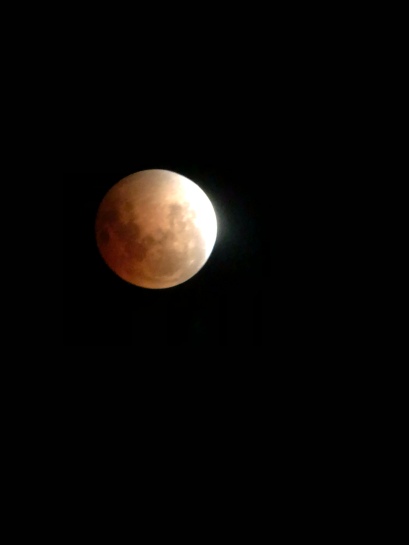 Everyone went to bed to catch a bit more sleep before getting up for school and work. What a great experience to share with the family, even though I felt awful all day from broken sleep and too much bad coffee.

The heavens declare the glory of God;
the skies proclaim the work of his hands.
2 Day after day they pour forth speech;
night after night they reveal knowledge.
3 They have no speech, they use no words;
no sound is heard from them.
4 Yet their voice goes out into all the earth,
their words to the ends of the world.